Fluid viscoelasticity can align nanoparticles in a cylindrical microchannel

Soft Matter was the title of the Nobel Lecture, (December 9, 1991) by Pierre Gilles DE GENNES, who identified its two major ingredients: Complexity and Flexibility. In some sense, Soft Matter entails with situations in which small forces have large effects. If practical applications are of interest Soft Matter Engineering comes into play, and represents the crossroad of physical chemistry and chemical engineering.
Our group has a longstanding research activity on modeling and simulation of soft matter, ranging from liquid crystals, to emulsions, and complex suspensions.

Now some words on the name of our group. Why Bottega of the Soft Matter? Essentially because we have the ambition to produce Researchers, and, as a byproduct, we hopefully produce scientific results as well.
Indeed, the organization of work in workshops (botteghe) is a practice that comes from ancient times. In the later Middle Ages, with the advent of communal society and the development of businesses, workshops and guilds become the basic structure of the social organization. In parallel, the internal structure of the workshops was transformed from the “mastery”, in which different personalities work together randomly and substantially parithetically, to the proper workshop, based on a clearly structured hierarchy.
The “master” (capobottega), in fact,  was the  guarantor before the client of quality and homogeneity of the work, that was actually the result of the contribution of others “workers” (lavoranti). In the Renaissance workshop, there was a clear division of tasks, which were distributed by the “master” for support under the seniority and expertise of each “worker”. 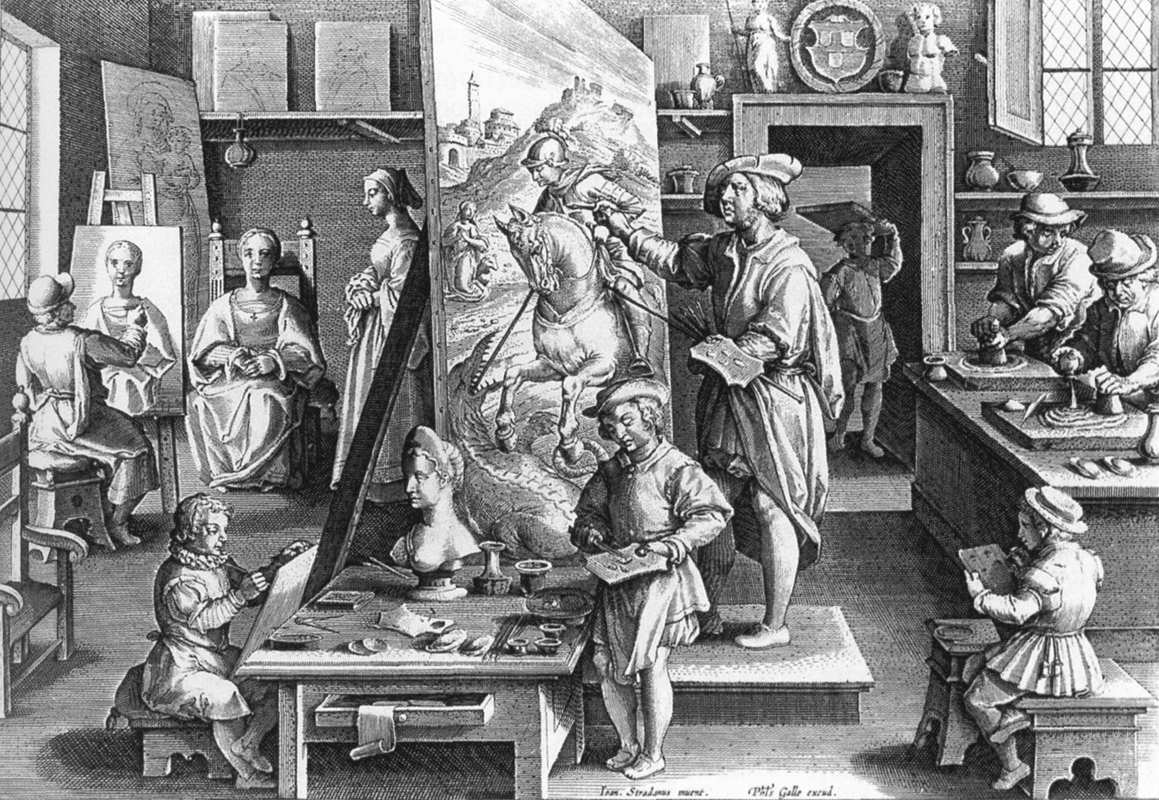 Under the guidance of the “master”, the structure of the workshop was generally made by (in ascending order) apprentices, wage-workers, assistants and “master guests”. It could also happen that two masters were associated to guide the workshop. In the case of a Painter’s Workshop, for example, the range of products required was very wide: from the great fresco cycles, to massive altarpieces, up to everyday objects smaller and simpler. Often the shop worked at different commissions in parallel, and only a precise division of labor could guarantee high efficiency. Master was entitled to the organization and definition of the work as a whole unit, the control of the homogeneity of the result and implementation of major parts: the work was always the result of more “hands”, while the Bottega owned, to use a modern term, the “trademark”.
The duration of the apprenticeship usually ranged between four and nine years: in this time young people were engaged in the preparation of colors and media for painting, but also practiced in the drawing, copying mainly from so-called “model books” that circulated among the various art workshops. Once grasped the technique, the apprentice became a laborer and then helped by devoting themselves to increasingly complex tasks, until the realization of entire parts of the work. The most talented could eventually open their own workshop.